The Mystery of Justo Armas 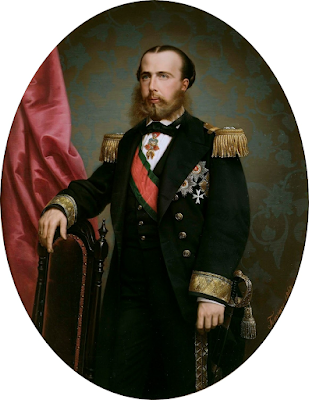 Maximilian I was an Austrian archduke who reigned as the only Emperor of the Second Mexican Empire from 10 April 1864 until his execution on 19 June 1867. A younger brother of Emperor Franz Joseph I of Austria, Maximilian had a distinguished career as commander-in-chief of the Imperial Austrian Navy.

Maximilian has been praised by some historians for his liberal reforms, genuine desire to help the people of Mexico, refusal to desert his loyal followers, and personal bravery during the siege of Querétaro. Other researchers consider him short-sighted in political and military affairs, and unwilling to restore democracy in Mexico even during the imminent collapse of the Second Mexican Empire. Today, anti-republican and anti-liberal political groups who advocate the Second Mexican Empire, such as the Nationalist Front of Mexico, are reported to gather every year in Querétaro to commemorate the execution of Maximilian and his followers.

According to ideas of conspiracy theory, Maximilian is said to have not been executed at all by a secret agreement with Juárez, but to have lived on in El Salvador until 1936 under the name of Justo Armas.

An excerpt from, "Who Was Justo Armas?" by John Lamperti:

Don Justo Armas was the Emperor Maximilian, the younger brother of Emperor Franz Josef of Austro-Hungary. Of course the world "knows" that this is equally impossible. Maximilian's brief rule in Mexico collapsed in 1867, shortly after Napoleon III withdrew the French troops that had established and maintained him on his throne. The emperor could have abdicated and returned to Europe with the French army, but he chose to stay out of a sense of duty and of obligation to his followers. Maximilian was soon captured by the forces of the Mexican Republic headed by Benito Juárez, and he was tried by court martial, sentenced to death, and executed on the Cerro de las Campanas near Querétaro in 1867. If that is so, the ex-emperor could hardly have reappeared in El Salvador as Justo Armas.

A San Salvador architect, Sr. Rolando Déneke, has been intrigued for years by the mystery of Justo Armas and has devoted time and resources to investigating his origin. Déneke has reportedly built a strong case for the theory that Justo Armas was Maximilian. His work has not been published, although that is promised in the near future. However, a Spanish diplomat assigned for a time to El Salvador met Déneke and learned many details of his investigation. This man, Santiago Miralles Huete, has presented the theory in the form of an entertaining novel entitled La Tierra Ligera, recently published in Madrid. That novel is the main source for the following resume of Sr. Déneke's case. An even newer book, an account of Maximilian's imperial career, expounds Déneke's theory but apparently has little additional evidence to offer.

Naturally the first and probably most difficult point to be explained is Maximilian's apparent execution in 1867. The answer given by Déneke (and Miralles) involves the reported fact that Maximilian, Justo Armas, and Benito Júarez were all high-ranking members of the Masonic order. One important law of freemasonry forbids the killing of brother Masons. This law presented Júarez with a painful dilemma: while Maximilian's death appeared to be necessary for reasons of state, he must not kill a fellow Mason. The solution Júarez found was a fake execution, to be followed by the disappearance forever of Maximilian of Austria. To make this scheme workable, Maximilian solemnly swore to use always an assumed name and to never reveal that the former emperor was still alive. His new identity was that of Justo Armas, the strange figure who appeared in Central America a few months after the supposed death of Maximilian. Armas first surfaced in Costa Rica, but within three years made his way to San Salvador where he passed the rest of a long and prosperous life. By this account, Armas would have immigrated to El Salvador early in the 1870s.

Following the supposed execution of the former emperor by firing squad, the embalmed body of Maximilian was sent home to Austria. When the casket was opened, his mother is said to have exclaimed, "This is not my son!" As a lighter touch, it is also reported that after the execution Benito Júarez published an edict announcing that the Archduke Francis Maximilian of Austria had been "hecho justo por las armas," a euphemism for execution. This phrase, the suggestion goes, was the origin of the name "Justo Armas"!

According to the theory, his high standing in the Masonic order was also key to the immediate warm reception given the unknown Justo Armas by members of El Salvador's elite. The nation's vice president and chancellor, don Gregorio Arbizú, received him warmly and found for him a respectable government job. As well as being a Mason, Sr. Arbizú was known for his monarchist sympathies which may have further facilitated their friendship. Soon don Justo was installed in a home of his own where he surrounded himself with "dozens of objects of Maximilian of Hapsburg which an invisible hand had managed to convey from Mexico."

There is more. Briefly, Justo Armas was said to bear a striking resemblance to Maximilian, once differences of age and dress are taken into account. Reportedly, don Justo did declare his identity as the ex-emperor to at least one friend during his years in San Salvador; of course even if he did so that cannot be considered conclusive. A Mexican lady ("La Paloma") who reportedly had been the lover of the emperor during his years on the throne became a nun after his death. As "Sister Trinidad" she worked in a San Salvador hospital and was known to regularly visit don Justo Armas, something very unusual for a woman in her situation. Perhaps the most suggestive piece of evidence, verifiable in part, is the visit in 1914 or 1915 by two emissaries of the Austrian government. These men apparently avoided contacts with Salvadoran government officials and instead persistently sought an interview with a reluctant don Justo. When they finally met, the Austrians reportedly begged him to "return" with them to Austria and assume his "rightful position" there, an offer or request which Armas steadfastly refused. All this, if verified, adds up to a suggestive if not compelling circumstantial case that don Justo Armas was in fact the former Emperor Maximilian of Mexico.