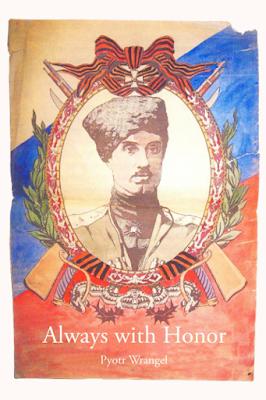 "Always with Honor: The Memoirs of General Wrangel."

Pyotr Nikolayevich Wrangel also known as Peter von Wrangel, was a Russian officer of Baltic German origin in the Imperial Russian Army. During the later stages of the Russian Civil War, he was commanding general of the anti-Bolshevik White Army in Southern Russia.

Wrangel gained a reputation as a skilled and just administrator, who, unlike some other White Army generals, did not tolerate lawlessness or looting by his troops. However, after he was unable to join forces with Admiral Kolchak and at the insistence of Denikin, he led his forces north towards Moscow on a failed attempt by the Whites to take it in autumn 1919. Continuing disagreement with Denikin led to his removal from command, and Wrangel departed for exile to Constantinople on February 8, 1920.

In 2015, the government of the Russian Federation began to repatriate the remains of white emigres that were buried abroad, but the descendants of Wrangel refused to have his remains returned to Russia as the current Russian government had not "yet condemned the evil [of Bolshevism]."

In September 2021, following the withdrawal of U.S. troops from Afghanistan, in an opinion piece in The Wall Street Journal, Wrangel's grandson Peter A. Basilevsky compared the "bureaucratic incompetence" of the U.S. government in Afghanistan to the successful November 1920 evacuation of 150,000 anti-Bolshevik soldiers and civilians under Wrangel which became possible with far inferior resources of the White army and in the face of the advancing Red Army.

An excerpt from, "A General and a ballerina" by Eric Vandenbroeck and co-workers, InternationalResearches.com:

As a follow-up to our earlier research about some of the actions and structure of Russian intelligence combined with a follow-up of our research about the Russian émigré communities, by the late 1920s, the wave of convenient but inexplicable “natural” deaths spread into Western Europe and even the United States. General Pyotr Wrangel, famously known as the Black Baron, was among the most famous victims.

Named for the black uniform he usually wore, Wrangel was one of the leading commanding officers among the troops that remained loyal to the fallen Tsar during the Russian Civil War. He was the last commander to leave the European part of the Soviet Republic in November 1920 and was known as one of the most prominent exiled White émigrés and military leaders of South Russia (as commander in chief).

In the Revolution, Wrangel joined the Whites - but only after the Reds had sought to kill his family. He was arguably the most successful and loved of all the White commanders and might have prevailed over the Bolsheviks had he been installed earlier. His fame was ensured when he became the last White Russian to leave Russia, refusing to embark until all his men were rescued and onboard. The grudging respect the Reds held for him was commemorated in the marching anthem of the Red Army celebrating their victory over the Black Baron, “White Army, Black Baron." It remains a favorite song of the Russian Army today.

After the defeat of the Whites, many of those who escaped gathered in Paris, expecting that the Red regime would collapse in a few months. The Black Baron did the same. Wrangel was the leading expatriate target for Stalin, not just for what he represented but for his effective leadership of the resistance abroad. Wrangel and his family narrowly avoided being on his yacht when an Italian steamer rammed it on a journey that had originated from a Soviet port. Unable to kill the Black Baron in an accident, Stalin turned to the secret Soviet tools of Laboratory One. Wrangel predicted his death in his autobiography, writing that the KGB would soon poison him in a disguised “natural” death. And true to form, a stranger posing as a Russian refugee eventually came and stayed with the Wrangel family as a butler at their home in Brussels. Not long after, the Black Baron, previously in robust health, developed severe respiratory problems that swiftly took his life. The “butler” quickly disappeared; all efforts to validate the background of this phantom failed. The Wrangel's and most observers were certain the Black Baron was murdered in a staged natural death. There would be no final charge across the steppes. He would live only in the Red Army’s song celebrating victory over him, which failed to mention that Wrangel was not felled by a bullet or sword but by poison.