The Spirit of Charles Lindbergh 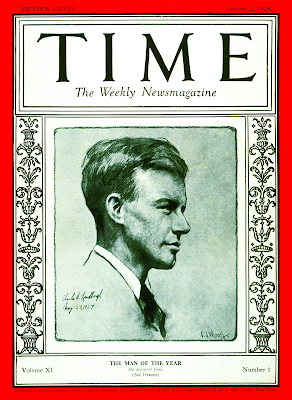 "On January 2, 1928, TIME magazine proclaimed Charles Lindbergh -Man of the Year- for 1927. To look back now, this is hardly a surprise-1927 was a big year not only for Lindbergh but for aviation in general, as well. Lindbergh, at 25, managed to shift from relative obscurity as a U.S. Air Mail pilot to instant world fame when he made his nonstop flight from Long Island, New York, to Paris. This was both the first solo transatlantic flight and the first non-stop flight between North America and mainland Europe. This feat won him the Orteig Prize." - Aviation Oil Outlet, "How Charles Lindbergh Became TIME's First Man of the Year" December 20, 2017.

Charles Lindbergh's solo flight across the Atlantic on May 20-21, 1927 is seen as one of the most important events of the 20th century, but memories have dimmed and, in an age when jet airplanes routinely cross the Atlantic Ocean with hundreds of passengers, we have lost sight of its significance. Accompanied by film footage of Lindbergh's flight, Professor Emerita Janet Lieberman of La Guardia Community College/CUNY gives her childhood recollections of the event and a Brooklyn parade celebrating Lindbergh, which she attended with her family. The magnificent Brooklyn parade took place on June 16, its 22-mile route crowded with 700,000 school children and their parents.

Lindbergh was a little-known air mail pilot based in St. Louis in early January 1927, when he heard about a $25,000 prize being offered to the first non-stop flight between New York and Paris. Lindbergh's historic flight earned him this prize and the adulation of the nation. Radio and newsreel film, new media of the age, spread news of his feat in ways unimaginable only ten years earlier. The 1920s was a decade of ballyhoo and heroes, and the Lone Eagle's transatlantic flight made him the quintessential hero of the era. His momentous feat also became the catalyst for the growth and preeminence of the American aviation industry, overtaking its European rivals.