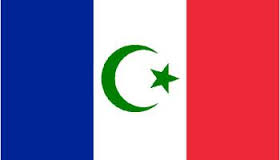 France's Islam problem is proof that karma exists. It was France that helped unleash Khomeini's thugs on the Iranian people in 1979. France sheltered the cleric, allowing him to propagate his message. And France also supports terrorist groups like ISIS in Syria.

France's record of support for radical Islam is long, extensive, and well-documented. So why are we supposed to feel sorry for this trouble-making nation? Fuck em. Let them lose their damn minds over some piece of fabric.

An excerpt from, "France and the Iranian Revolution" The Brussels Journal, January 24, 2007:


The irony is that while the Ayatollah Khomeini could establish an Islamic state directed from the suburbs of Paris, the French 30 years later have hundreds of Islamic mini-states on French soil. Khomeini and his cronies used this window of opportunity at a critical stage of the uprising against the Shah to consolidate their power and establish their lead over the direction of which the Revolution was heading.


"He had originally planned to relocate to Syria, but his aides noted that he would be monitored and highly restricted if he stayed anywhere in the Middle East. He requested and received political asylum in France instead, and on October 8 he relocated to a rented house in Neauphle-le-Château outside of Paris.

The move was a huge boost to his cause. It put him within reach of the international news media and sympathetic (at least in their opposition to the shah) intellectuals, but perhaps more importantly, the phone infrastructure in Europe was far more reliable, enabling him to stay in close touch with contacts in Iran and participate in the groundwork for the post-imperial regime. If he had stayed in southern Iraq, who knows whether he would have had such a profound influence on subsequent events."