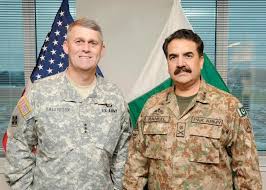 "The root of all these crises is Muhammad Ali Jinnah and his Two Nation Theory, and Britain's insistence on forming Pakistan so that US and UK can have armed bases in the North-West India to stop the Red Army advancing towards the Indian Ocean. I have researched this. Most Pakistanis and Indians are not aware of this but Pakistan was the creation of the Anglo-American enterprise. A lot of money was spent on it. British money was routed through Nawab of Hyderabad (Deccan) to the Muslim League." - Tarek Fatah.

An excerpt from, "Pakistan a British creation" by K Subrahmanyam, The Times of India, June 22, 2005:


Jinnah was a convenient instrument for the British against the Congress. It is no surprise that Pakistan became a much-needed base for the West in the Cold War against the Soviet Union.


Tarek Fatah explains why Muhammad Ali Jinnah and his Two nation Theory are the root of all crises now afflicting South Asia, from Khalistan, to Kashmir, to Balochistan, to the assassinations of Indira Gandhi, Liaquat Ali Khan and Bhutto, etc. The one million stateless people languishing in Dhaka who are rejected by Bangladesh, Pakistan and India are the Jinnah's orphans. Clip taken from 'Bilatakalluf with Tahir Gora' - Episode 86 - Will Pakistan Survive with Tarek Fatah on Rawal TV.