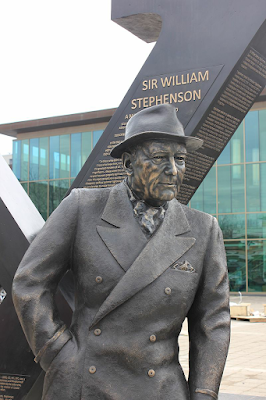 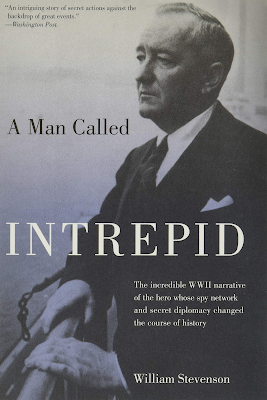 "A Man Called Intrepid: The Incredible WWII Narrative of the Hero Whose Spy Network and Secret Diplomacy Changed the Course of History" by William Stevenson.
Amazon:

First published in 1976, A Man Called Intrepid was an immediate bestseller. With over thirty black-and-white photographs and countless World War II secrets, this book revealed startling information that had remained buried for decades. Detailing the infamous Camp X training center in Ontario, Canada; the miraculous breaking of the Ultra Code used by the Enigma Machine; and dozens of other stories of clandestine missions, A Man Called Intrepid is an undisputed modern classic.

Sir William Samuel Stephenson CC MC DFC (23 January 1897 – 31 January 1989), born William Samuel Clouston Stanger, was a Canadian soldier, fighter pilot, businessman and spymaster who served as the senior representative of the British Security Coordination (BSC) for the western allies during World War II. He is best known by his wartime intelligence codename, Intrepid. Many people consider him to be one of the real-life inspirations for James Bond. Ian Fleming himself once wrote, "James Bond is a highly romanticised version of a true spy. The real thing is... William Stephenson."

For his extraordinary service to the war effort, he was made a Knight Bachelor by King George VI in the 1945 New Year Honours. In recommending Stephenson for the knighthood, Winston Churchill wrote: "This one is dear to my heart."

In November 1946 Stephenson received the Medal for Merit from President Harry S. Truman, at that time the highest U.S. civilian award. He was the first non-American to be so honoured. General "Wild Bill" Donovan presented the medal. The citation paid tribute to Stephenson's "valuable assistance to America in the fields of intelligence and special operations".

The "Quiet Canadian" was recognized by his native land late: he was made a Companion of the Order of Canada on 17 December 1979, and invested in the Order on 5 February 1980.

On 2 May 2000, CIA Executive Director David W. Carey, representing Director of Central Intelligence George Tenet and Deputy Director John A. Gordon, accepted from the Intrepid Society of Winnipeg, Manitoba, a bronze statuette of Stephenson. In his remarks, Carey said:

Sir William Stephenson played a key role in the creation of the CIA. He realized early on that America needed a strong intelligence organization and lobbied contacts close to President Roosevelt to appoint a U.S. "coordinator" to oversee FBI and military intelligence. He urged that the job be given to William J. "Wild Bill" Donovan, who had recently toured British defences and gained the confidence of Prime Minister Winston Churchill. Although Roosevelt didn't establish exactly what Sir William had in mind, the organization created represented a revolutionary step in the history of American intelligence. Donovan's Office of Strategic Services was the first "central" U.S. intelligence service. OSS worked closely with and learned from Sir William and other Canadian and British officials during the war. A little later, these OSS officers formed the core of the CIA. Intrepid may not have technically been the father of CIA, but he's certainly in our lineage someplace.