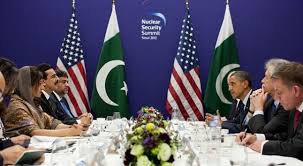 Pentagon generals wipe their asses with $300 million. But to the Pakistanis $300 million is like $3 trillion. The political message that is being sent to the corrupt liars in the Pakistani army is strong. This is how a pimp treats a battered slave. It denies it chicken feed.


Pakistan has conveyed its disappointment to America that despite its "concerted and forceful" campaign against all terrorist groups, including the dreaded Haqqani network, the US did not "certify" its actions and blocked the USD 300 million military aid to the country.

In a meeting with US President Barack Obama's envoy Peter Lavoy, Pakistan Foreign Secretary Aizaz Ahmad Chaudhary expressed concerns over the halt to the military aid.

US Defence Secretary Ashton Carter did not give Congressional certification to Pakistan for satisfactory action against the Haqqani network this year.

In the absence of the certification, the Pentagon blocked the release of USD 300 million military aid to Pakistan under Coalition Support Fund, which is essentially reimbursement money for the expenses made by Pakistan Army in support of US operations in Afghanistan.