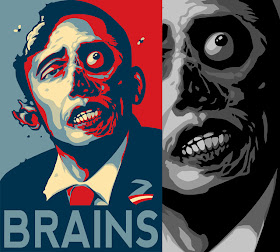 Watch this video by journalist/activist Luke Rudkowski who interviews kids outside of the White House after President Obama announced the death of film star/patsy terrorist Osama Bin Laden. Be careful not to vomit because it is so fucking disgusting to watch. The people are really, really stupid. They are the products of mega state propaganda, dumbed-down schooling, and a degraded mass popular culture that is completely anti-thought.

Maybe some of the people are actors who were paid to stand outside the White House and cheer. This is not out of the question. We know that the U.S. military coordinated crowds to cheer and wave when Saddam's statue was knocked down in Baghdad. State managed productions of media events is a method that is regularly used in the hijacked United States of America.

But can people be this stupid, gullible, and ignorant? I'm trying not to hate the braindead masses of America but they're making it hard. I know they are just blind victims of America's shadow state who can't see they are being tricked and conned by dark propagandists who work in the CIA, Pentagon, and media. People have been super brainwashed after a decade of covert propaganda and psychological trickery by the scumbags in the White House and CIA. But still, it's hard to excuse this much stupidity and file all of it under the responsibility of the tyrants. I can't make excuses for people chanting "O-ba-ma! O-ba-ma!" over and over again like he is their knight in shining armor. Obama didn't personally pull the trigger. He hasn't done shit to keep America safe and free, he's just a slimy and degenerate politician/actor who reads scripts off of a teleprompter. They might as well chant the name of a Hollywood action figure like John McClane or some superhero.

This is all fucked up. The whole war on terror facade shows no sign of stopping. People are being prepared to accept more violence and war and destruction in the Middle East. The tyrants in Washington need the ignorant idiots to continue to believe in the false reality that they have constructed behind the scenes or else the entire game will be over, and they will be hanged for their mega crimes. These warmaking motherfuckers are going ALL in. They want to raise the tensions in the Middle East and start world war three. It is so obvious. It is so evil.